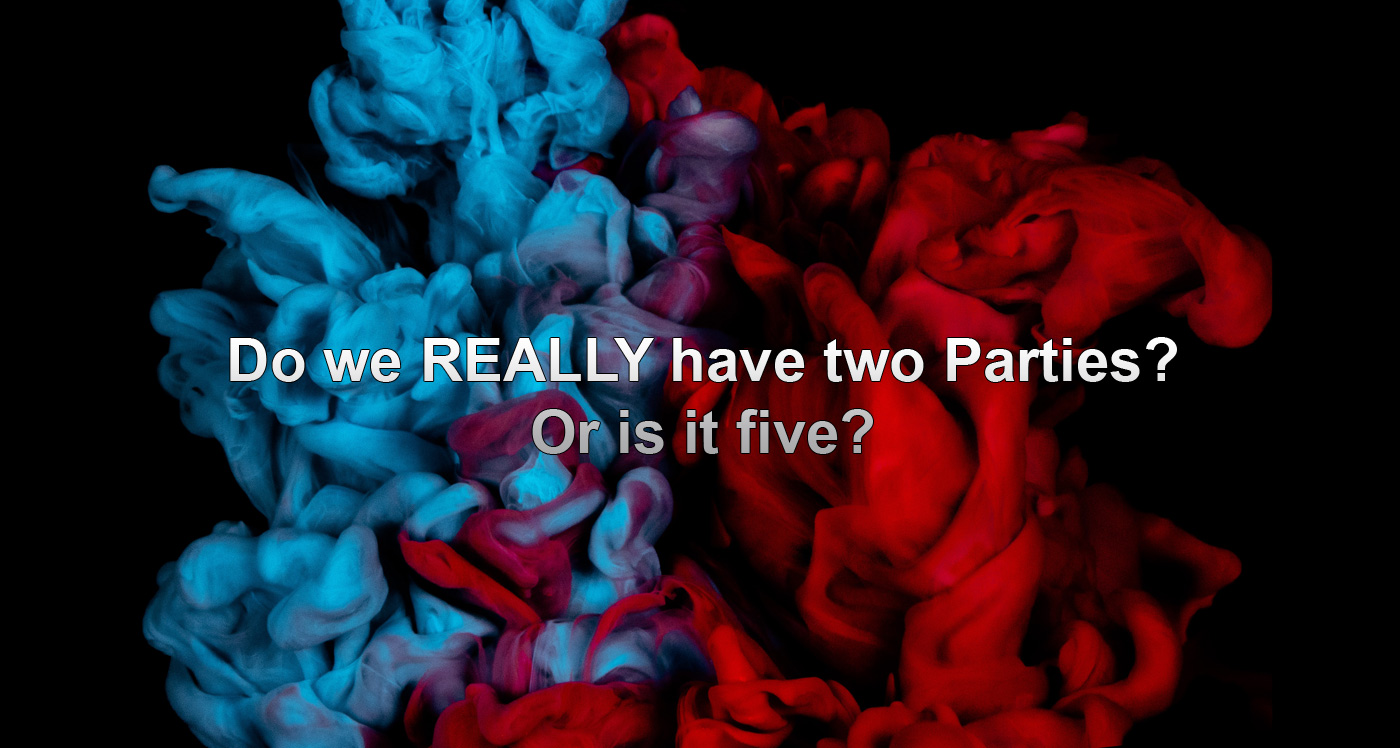 In view of the political problems we have seen over the last few years, I think it’s time to review the political parties because if we don’t we are bound to repeating the same mistakes over and over.

For many decades, most people have looked upon the United States as having two parties. The Republicans and the Democrats. However, if you paid attention, you would have noticed that regardless of the party that takes over / is controlling the Presidency or the Senate / House (or most offices closer to home), the policies continue almost as though no change occurred toward more and more control for those in government and less and less liberty for the people. Some call those parties the Demoplican and the Republicrats. There was very little difference until 2016 when Donald Trump shone a bright spotlight on the shenanigans of the Republican party simply by being himself and looking after the best interests of the American people.

In general, the main difference between the main two parties comes to spending and taxation where Democrats put a greater emphasis on social spending while Republicans put more emphasis on military spending all the while both irresponsibly spend more than what taxation can sustain and reducing the USA to the level of a third world country.

This two-party, charade, reminds me of the customer who goes to a jewelry store and feels like he’s been taken advantage of. He storms out of the store and before closing the door behind him, yells back that he’s done with their shoddy service and is no longer giving them his business, he is going to the store next door. Ha ! That’s what the store gets for what it did ! He goes next door and purchases what he wants but it’s still not a great experience. Little does he know that the two stores have the same owner. The same problem exists for us. Both Republicans and Democrats have been taking advantage of the American People for decades. And every time one party betrays their constituents, the people who voted for that party switch to the other party. Ha ! They will show the party what happens! The pendulum will keep swinging in bigger and bigger arcs.

“Right now, this process [who does the counting and how and when the votes are counted ] is controlled by an “establishment” or “ruling class” (identified long ago by C. Wright Mills and, more recently, by Angelo Codevilla) that encompasses both major political parties—a bipartisan political elite. Under the false guise of social activism, a consortium of 21st-century globalist robber-barons seeks to monopolize both domestic and international economies. The seemingly innocuous concept of corporate social responsibility has morphed from a mildly leftist concern for equality into the idea that social media giants (a technocracy) and their allies have the duty to control the political process and speech.

The Republican portion of the establishment (Republicans in name only, such as Peggy Noonan of the Wall Street Journal, Karl Rove, and a raft of others), with a few notable exceptions, will continue to be run by lackeys who are corrupt careerists lacking in courage or integrity.

The Democratic Party has its own version consisting of a consortium of billionaires (who live in gated communities and whose children are assured entrance into the Ivy League) aided and abetted by their spokespersons (who may also live in lesser gated communities) of the grievance universe (e.g., the civil rights industry). The latter will mobilize the aggrieved—the poor, the angry, and hypercritical intellectuals, along with the dysfunctional—to vote and to serve as the shock troops whose job it is to intimidate all who oppose the establishment. Part of the national tragedy is that the “aggrieved” do not understand that they are being manipulated.

An example of this commonality of interests among the bipartisan elite is their support for open borders by all members of the establishment, Republicans and Democrats alike.

It strikes many as counterintuitive that billionaire globalists are allied with the aggrieved who advocate democratic socialism. Part of the reason for this is that many are not familiar with “globalism. …”

–”What Is to Be Done? The consequences of the big steal are terrifying. But the interests behind it are vast.” By Theodore R. Malloch and Nicholas Capaldi August 29, 2022

In other words the view that it’s a two-Party system is now an incomplete and incorrect view of Politics in America. Because both parties have done such a poor job, or rather have ignored the interests of the people in favor of special interests, the People elected Donald Trump. What became clear after Donald Trump’s election is that the Republican Party is split between America First and the “Establishment” where America First seeks to represent the interest of the people with the Establishment faction seeking to promote and preserve the status quo for special interests who have bought their support.

On the other hand, the Democrat party, is split between those promoting the crazy socialist / communist / tyrannical / Globalist / WEF / UN socialist/green 2030 agenda and the traditional middle of the road democrats who would have more in common with America Firsters than with their commie counterparts – those are the people who are switching parties right now.

However, there are the libertarian party and independent parties. Libertarians have never had much of a voice because people have had little interest but that may change now that they come to the realization that RINOs work against their best interests. In the past there was this feeling that if you voted Libertarian or independent you are “wasting your vote”. In light of the above, that’s no longer a valid perspective. Libertarians have a lot in common with both America Firsters and traditional middle-of-the-road democrats. They promote liberty and the right to self determination. To my knowledge they are not controlled by the establishment.

Those in power are going to do everything they can to prevent America First from being successful because they have everything to lose.

We have three options :

There is no question that the Establishment is working on the demise of America and the American people and that’s a non-starter for anyone who has a brain that they are using and their own best interests in mind. What will you do with this knowledge ?