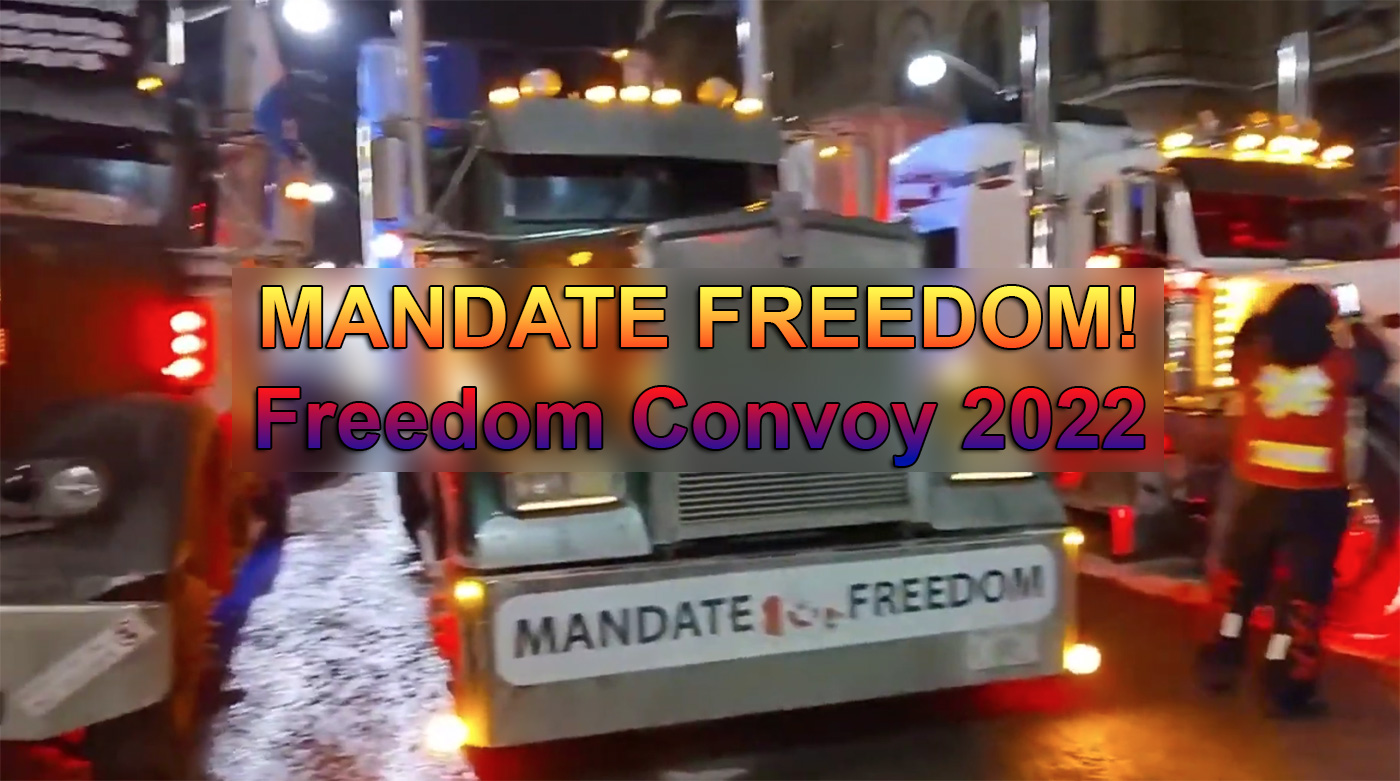 Freedom Convoy 2022 was launched early last week with the departure of thousands of trucks and cars from Western Canada with a destination of Ottawa (now known as Trudeau’s Truckstop). As the days passed and the convoy got closer to what became “Trudeau’s Truckstop” (Ottawa), more cars and trucks joined – cars and trucks from literally every province in Canada joined.  They were met on the way by tens of thousands if not hundreds of thousands of people displaying their support at intersections, overpasses or just outside their homes.  The convoy started arriving at Trudeau’s Truckstop on Friday, January 28. The Convoy aims to eliminate all mandates from Canada which has been in virtual lockdown for the last two years (when it was in fact only supposed to last 15 days). To be clear, the convoy is composed of both vaxxed and unvaxxed. It’s not about the vax it’s about Freedom.  Be sure to watch the press conference (a press conference unlike any other you’ve seen in the past – see below).

PUBLIC SUPPORT ALONG THE WAY:

All the along the route thousands of people were positioned at nearly every freeway overpass encouraging and thanking Truckers for fighting for freedom.

Children wrote letters, thank you notes, native tribes danced to the beat of their drummers at truck stops, people donated food and blankets, no one wore masks and everyone smiled.

Link to video above: (https://rumble.com/vtl63m-volunteers-gather-massive-food-donations-for-freedom-convoy.html)

Quebeqois and Albertans put away their differences. Canada came together to fight against the political class / globalists and their tyranical designs on their country. It’s a very different kind of fight. It involves friendship, networking, politeness, hugs, handshakes and many other acts of kindness with smiles as the most common form of “currency.”

(Link to the video above: https://rumble.com/vthxnl-thousands-of-people-on-almost-every-overpass-freedom-convoy-rolls-across-ca.html)

The FAKE NEWS and CITIZEN JOURNALISTS:

The legacy (scratch that, call it NARRATIVE) media smearing an entire population, no one can believe their lies that filled with contradictions. Thankfully, there are a growing number of citizen journalists who have taken it upon themselves to report what’s happening. It’s wonderful.

(Link to the video above: (Link: https://rumble.com/vtsnhe-live-from-ottawas-freedom-convoy-2022-protest-viva-on-the-street.html)

The Convoy’s organizers held a press conference on January 30 but excluded the FAKE NEWS. They explain why in the video. It’s well worth your time to watch to understand what monumental task they and all the participants have accomplished and shows how many people were truly inspired to participate. Watch and learn! 🙂

(Link to the video above: https://rumble.com/vtu6tu-freedom-convoy-2022-organizers-hold-first-live-press-conference-january-30-.html)

Not only did untold numbers support the convoy along the way, thousands showed up on Sunday for the Rally – this is a popular uprising in a most peaceful manner:

(Link to the video above: https://rumble.com/vtonst-freedom-convoy-update-from-ottawa-canada-sunday-january-30-2022.html)

You can find many more videos about the Freedom Convoy on tv.gab.com, rumble.com, odysee.com, ugetube.com, and others.

Truckers and people around the world have been inspired by the actions of Canadians (who would have ever thought that Canadians of all people would be the ones initiating the fight for freedom? Just goes to show that no matter how much you give in to tyranny, there’s a point where you just won’t take it anymore.

American truckers are planning a run on Washington DC. Australian truckers and European truckers are mobilizing too. In some ways trucks are better equipped to do this (they can carry a lot of extra equipment, portable toilets, food, they have beds in their cabs, refrigerators, etc.) but non-truckers have RVs, trucks, trailers, caravans and many other ways to compensate for not having a truck. And like many Canadians who couldn’t go to Ottawa, you can do much without leaving your town.

Towing away: Apparently, the Mayor of Ottawa contacted towing contractors to get the trucks removed from downtown Ottawa but apparently they all had COVID-19 and couldn’t do it.

Note: Please turn OFF the legacy / fake news. There are plenty of great alternatives that give you not only raw footage but also better information.

Also, we will no longer post any videos from youtube (for the purposes of this page all the videos above come from rumble.com but it has come to our attention that rumble has adopted the terms and conditions of Apple and Google which makes prone to censorship – GAB TV will be our preferred source in the future). Why should we post on youtube? Most of the videos we’ve posted in the past have been censored by youtube. So there’s no point – they just get removed. We encourage you to boycott youtube and spend your time on free speech alternatives gab.com, brighteon.com, odysee.com, ugetube.com and so many others.