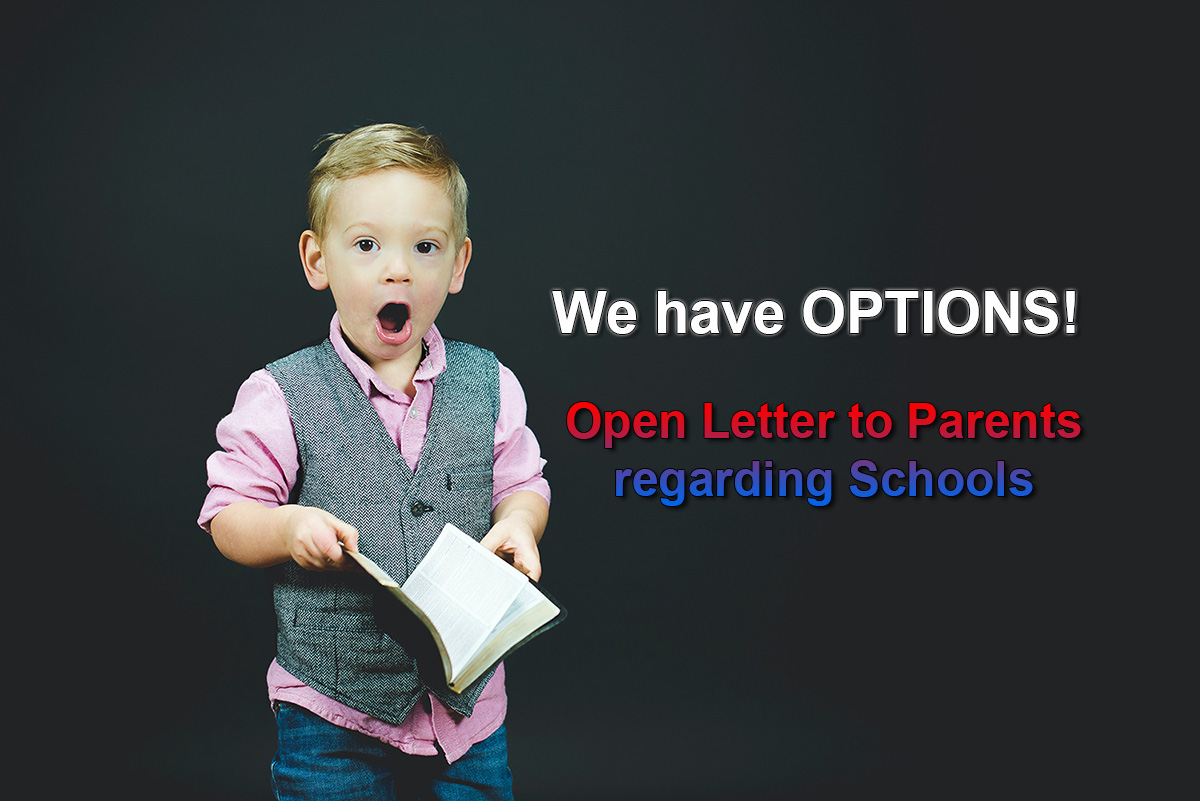 Open Letter to Parents, Grand-Parents and the Community at large

First, I’d like to preface this with the fact that the only reason we have a problem with the Wuhan virus is because there has been a concerted effort to prevent early treatment of the Wuhan virus and certain interests have also censored any information about early treatment. With early treatment the Wuhan virus would be a non-issue. Further, children are known to not be affected by the Wuhan virus and there is absolutely no valid reason to force masks on the children. Teachers on the other hand may want to look into prophylactic medicines that are available and proven to be 90% effective in preventing the Wuhan virus. However, it has become very clear in the past weeks that School Boards in Nevada (and the Nevada Legislature) have every intention of ignoring our objections and not only teaching children racism otherwise known as Critical Race Theory or EQUITY (another synonym) but also to keep forcing them to wear masks regardless of the senselessness of the policy.

“The plain fact is that education is itself a form of propaganda – a deliberate scheme to outfit the pupil, not with the capacity to weigh ideas, but with a simple appetite for gulping ideas ready-made. The aim is to make ‘good’ citizens, which is to say, docile and uninquisitive citizens.”

Mencken also said that the purpose of public education was “to put down dissent and originality.”

The plain fact of the matter is that imposing the wearing of masks fits this purpose perfectly. It dehumanizes, reduces everyone to be another faceless ‘brick in the wall’ as so clearly depicted in Pink Floyd’s song by the same name. It teaches children that they are no one, they are not individuals, they are part of the collective hive-mind that this school and so many others are are promoting in their quest for a docile citizenry.

Likewise with Critical Race Theory (CRT) or Equity (and don’t be fooled, Equity IS Critical Race Theory despite the denials of school boards – if it walks like a duck, quacks like a duck, it’s a DUCK). CRT dehumanizes people (and kids), it makes everyone another faceless person, just another “brick in the wall” of the collective with your designation as being part of a particular “class” as the basis for all judgement against you – it isn’t about character or anything else of substance.

If you want your children to be indoctrinated, stamped into conformity, if you want to allow this school to build a prison in the minds of your children, please by all means keep them in public schools. If you want to open a world of possibility, a world where your children can make a difference, where they can thrive and make a better world for themselves and others, where they have the ability to think critically, take them out of this authoritarian institution where conformity is the only outcome that really matters – and do this without further delay.

In 2019, in the US, 2.5 million children were home-schooled. Home schooling is legal in Nevada and compulsory schooling starts at 7 years old. There are plenty of resources at your disposal – it may seem unsurmountable at first but you’ll find plenty of help and resources. We know that public schooling doesn’t work so there’s no point in emulating the same system at home. A completely different approach is and has been used for a long time with great results that will not only lead to the growth and learning of your children but will help you grow and become a better parent too. Be encouraged that many have done this before you and that there are plenty of resources at your disposal. If nothing else, explore the possibility – you have nothing to lose.

Northern Nevada Home Schools NNHS.org is a great place to start with resources from how to file the proper Notice with the State, to figuring out the best curriculum. LTInevada.org – Light, Truth, and Intelligence is a God-based, family-centered homeschool community that meets once a week in Minden with classes for all ages (including moms) taught by members of the LTI community. They are now accepting applications for the 2021-2022 school year.

How to take kids out of school:

Republican Women of Reno (RWR) is organizing a workshop where you can learn more about your options – July 14, 2021 – click here for more information.

And here is a free online homeschool conference to help families who want to educate their kids at home.