What was Operation Trust? Is the 17th letter of the Alphabet another version of that Operation? 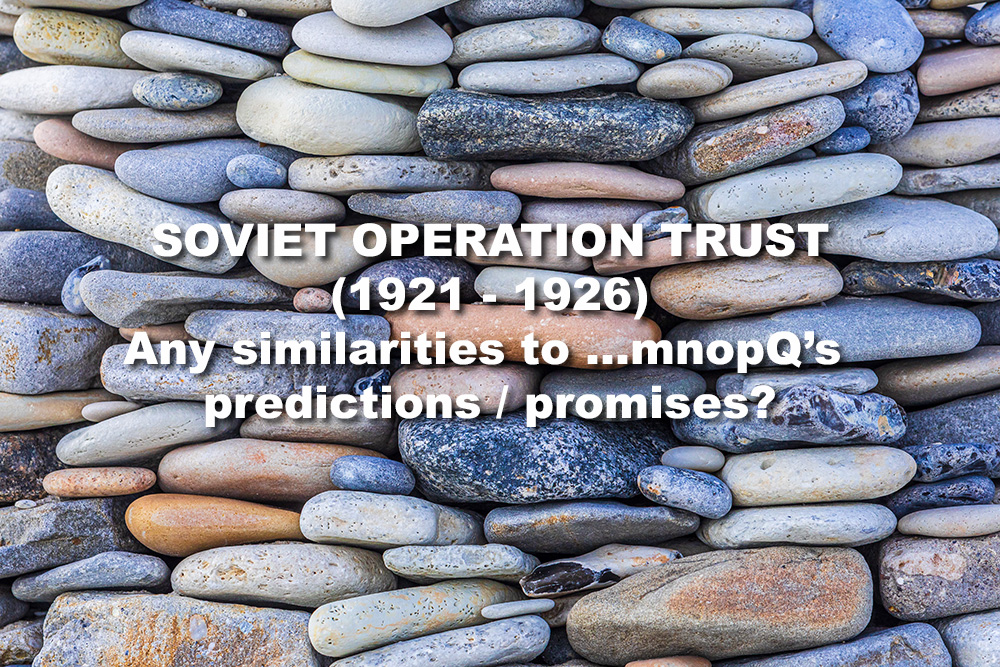 For those who would put all of their trust into an entity whose name starts with a single letter and is found between the letters P and R? We aren’t saying whether or not these statements & predictions or promises are real or not but we would caution you and look to history for some guidance.

“Operation Trust was a counterintelligence operation of the State Political Directorate (GPU) of the Soviet Union. The operation, which was set up by GPU’s predecessor Cheka, ran from 1921 to 1926, set up a fake anti-Bolshevik resistance organization, “Monarchist Union of Central Russia”, MUCR, in order to help the OGPU identify real monarchists and anti-Bolsheviks. The created front company was called the Moscow Municipal Credit Association.”

“Operation Trust” was a Bolshevik Counter-Intelligence honeypot trap to identify anti-communist patriots by having them wait for a secret military plan that didn’t exist. The communist operation from 1921 to 1926 aimed at neutralizing the anti-communist opposition by creating the false impression that a powerful group of military leaders had organized to stop the communists’ takeover. Then the Bolsheviks then later arrested and persecuted those involved.

The Gateway Pundit – click here to read the complete article

Maybe the predictions / promises of the 17th’s letter of the alphabet are correct and will come to pass. We don’t know. However, do you really want to sit back, do nothing and let someone else do all the work? That’s not very patriotic. It’s long past time for everyone to start getting involved and push back against tyranny in a peaceful and creative manner.

This paper examines the matter in more detail. (Note: as usual make up your own mind as to the validity of any provided here – or anywhere else for that matter).

If this topic is of interest to you, you might consider reading: Anatoliy Golitsyn’s “NEW LIES FOR OLD” (see pages 13-15 for info about Operation Trust). You can download the book for free from this source but we make no representations as to the accuracy of the transcription.

2 thoughts on “What was Operation Trust? Is the 17th letter of the Alphabet another version of that Operation?”