From Freedom and Liberty to Slavery? Listen to Audio file! 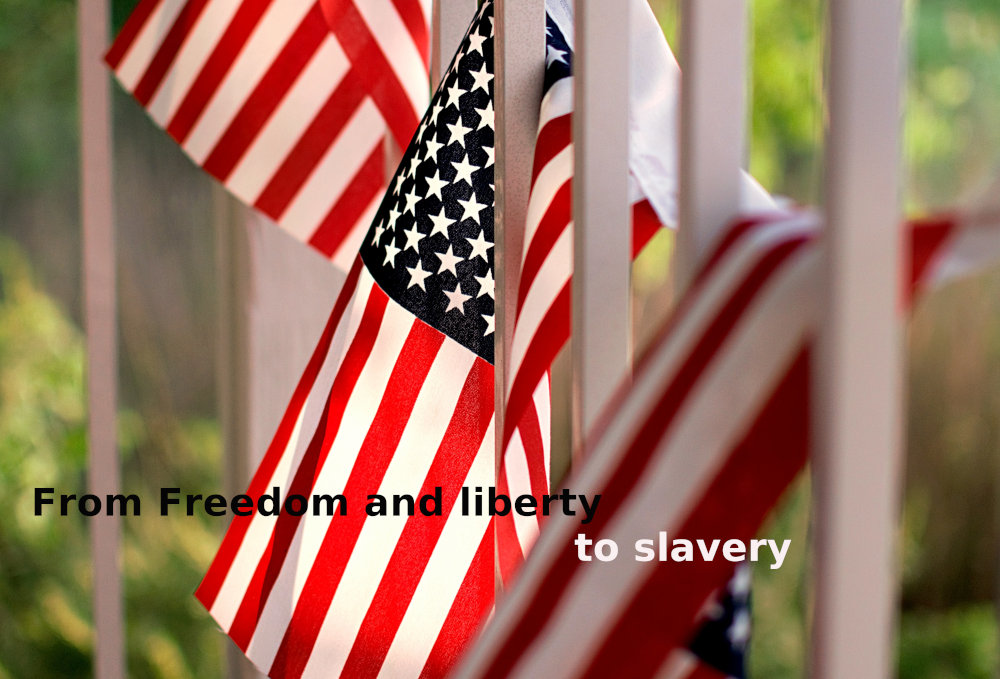 Here’s what’s happened. To see a clear-headed video of where this is all going, watch the video at the bottom of this article. Remember to pass it on!

“In just several months, the U.S. was transformed into an obedient socialist country. Government dictates what events are acceptable to attend, what holidays are acceptable to celebrate. Violent protests that instill fear and destroy property are okay, but church services, family funerals, and patriotic gatherings are dangerous.

And you bought it all without a fight.

Standing in a graduation line is a “safety hazard.” Small businesses were forced to close but crowds to support the corporate money machine at Walmart, Lowes and Home Depot are OK.

How about a little hush money? Here’s $2,400 that we stole out of your pay check in the first place. Enjoy. Buy something with it. From a big corporation.

Cash is dirty. We can’t give change. There’s a coin shortage. Use your card. In 4 months, they convinced you to use a traceable card for everything.

In less than 4 months, our government successfully instilled fear in a majority of the population that then allows them to control every aspect of your life. Including what you eat, where you go, and who you see.

And the most dangerous and terrifying part? People are not afraid of the government who removed their freedom. No, they’re afraid of their neighbors, family, and friends.

AND THEY HATE THOSE THAT WON’T COMPLY.

It’s absolutely terrifying to me that so many people don’t question “authority.” They are willing to surrender their critical thinking skills and independence. They just gave up without thinking. Without a fight.

Do you know what’s coming next?

“It’s just a vaccine. Come on. It’s for the greater good.”

To everyone that doesn’t believe this is possible – DO YOU UNDERSTAND that government successfully dictated to people WHEN they were allowed to be outside, where they were allowed to go, and how their children would be educated in less than 4 months? And that a majority of the population followed blindly because they were told to do so.

You’re kidding yourself if you think this behavior won’t be repeated with a vaccine. Or whatever the next step is.

Over 6 million were exterminated in Germany because 97% of the population cowered to populist control. Nobody wanted to think about it. It’s easier to just ignore it, to go along, to do what you’re told.

But that couldn’t happen here, right? If you thought 2020 was a terrible year, just wait and see what they have in store for us next year… the sheep will follow each other right over the cliff.

This is why the Second Amendment was put in the US Constitution………..to guard against the Government forcing the citizens to give up their freedoms. The tipping point is getting near.

Do you want to know where this is all headed? WATCH THIS!

This video was originally found at https://youtu.be/C1-0XKYAZII

It was censored by Youtube under the pretext and pretense that it violated their rules. We will be reposting this video in the near future. In the meantime, click on the link below to download the audio portion.

The interview of Catherine Austin-Fitts, is the full unedited interview that will be included in part in the new documentary coming at the end of January entitled: Planet Lockdown – find out more at https://www.planetlockdownfilm.com/

2 thoughts on “From Freedom and Liberty to Slavery? Listen to Audio file!”