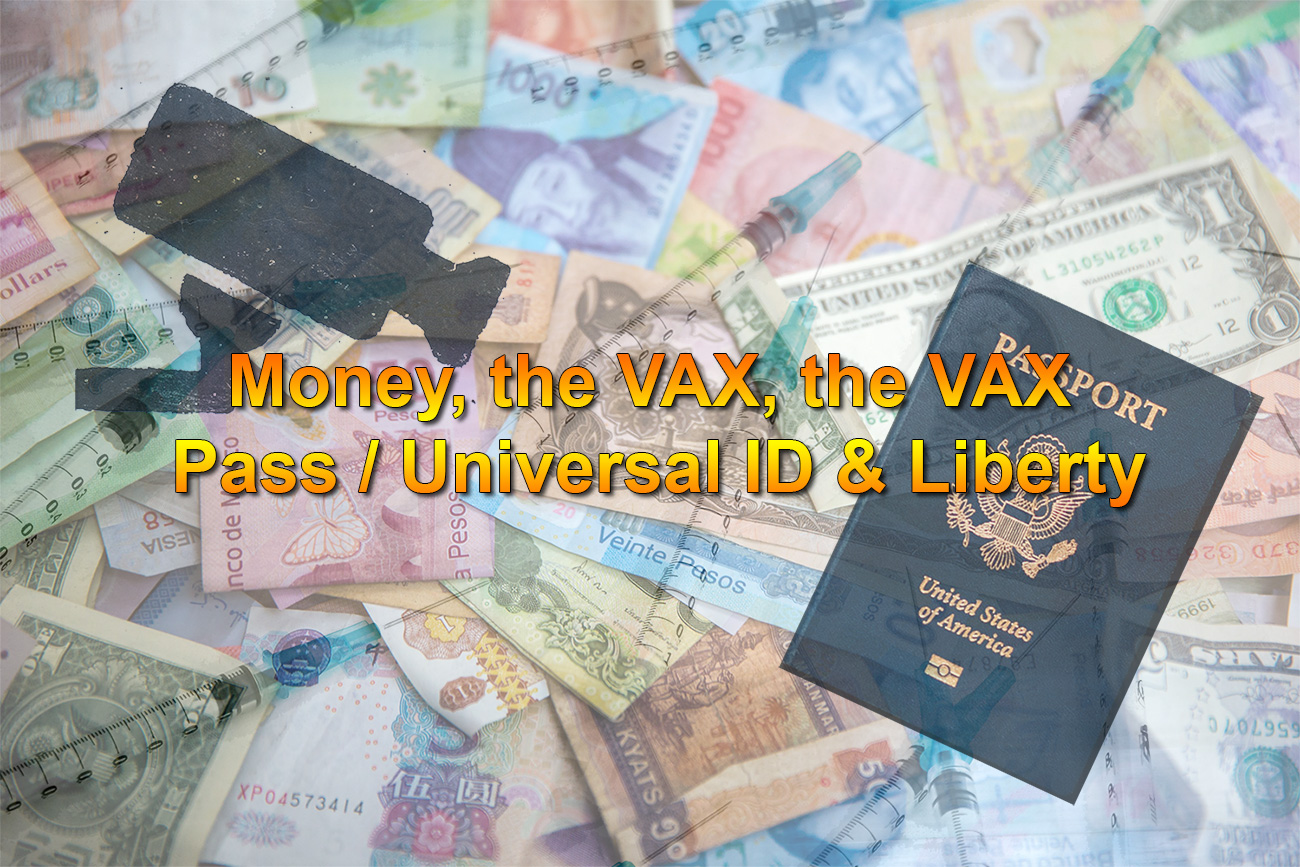 What do money, the jab, jab passports / universal ID, and LIberty have in common. One thing. The first three are designed to take away the last.

Background – from Liberty to Slavery

The evil grip of the globalist cabal has been slowly (and KNOWINGLY) tightened around our collective necks for some time….and it all comes back to the money.  The heavy yoke of debt slavery, employed as a means to usher in the NWO, was an integral part of how they sought to bring it to fruition.

The good news is that their plan has been thwarted. They never thought she’d lose (Clinton).

For those of you who aren’t aware of this, it’s mathematically impossible to pay back a debt with the same debt if interest is added to it. Let me illustrate. Your neighbor loans you ten widgets that only your neighbor knows how to build – no other widgets exist anywhere else – and you agree to pay your neighbor back eleven of those same unique widgets (that only your neighbor knows how to make) by the end of the year. That’s an oversimplification but it’s just about what happens. In other words, it’s IMPOSSIBLE to pay off the debt. But no one speaks of this. Everyone speaks of the debt as if it were real and valid. So in a world where that debt is considered real and valid, how do you pay off a debt if you can’t. In the old days, debtors who couldn’t pay their debts were imprisoned. Today, with countries that have hundreds of millions of people, you can’t possibly put everyone in prison. The solution? Turn the countries into prisons. You do it one citizen at a time, one jab at a time, one currency at a time.

Oh, and these people who corrupted the American monetary system didn’t stop there. They corrupted just about every country and money system on the planet. Ask the Babylonians how they liked it when their debt system finally collapsed. It wasn’t pretty and nor is this.

“America surrendered to the pressure for a central bank in 1913 with the help of James Warburg’s father, Paul. Woodrow Wilson signed the Federal Reserve Act, following the model of Europe, but in a way thought palatable to the American people. Thus, we have been at constant war ever since 1917, and have allowed our wealth to be transferred elsewhere. In one hundred years we have gone from a debt of $3 billion to $30 trillion. Decentralized authority—Federalism—gave way to the more easily corruptible federal power.

This is the reality of today—the mission by those opposed to our Constitutional Republic is now how to get the American people to consent to the loss of their Constitutional system and accept perpetual debt slavery and control through the United Nations. “The supranational sovereignty of an intellectual elite and world bankers” as David Rockefeller tells us; “by conquest or consent” adds James Warburg.”

American Thinker: The Flow of Money Creates a Path to One World Government

Here are two videos that are worth watching that explain in more detail exactly what COVID, the JABS and the VAX PASSES are about (and scroll below the last video to see what YOU CAN DO about it – we must all get involved!):

Direct link to video above: https://www.bitchute.com/video/A1i3YtzVzKXf/

Direct link to video above: https://www.youtube.com/watch?v=B9kbQdwHHbY

How to stop the agenda: 22 ways to stop vax ID passports

What the corrupt establishment has done to our animals is what they are now rolling out for humans through the vaccine ID passport, only with far greater repercussions and control because they are heading straight for your bank account.

They system has already been tested. Find out where it’s headed and 22 ways to stop vaccine ID passports.

This must be stopped – our future depends on it. Click here to get this report (surf that site too, excellent resources there!)